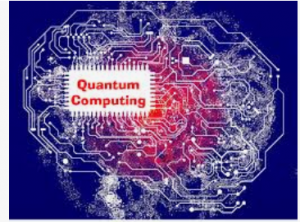 Quantum computers are different from other computers such as DNA computers and traditional computers based on transistors. Some computing architectures such as optical computers may use classical superposition of electromagnetic waves, but without some specifically quantum mechanical resources such as entanglement, they have less potential for computational speed-up than quantum computers.

Quantum computing is based on the fact that, in the microscopic world, things don’t have to be as clear-cut as we’d expect from our macroscopic experience. Tiny particles, such as electrons or photons, can simultaneously take on states that we would normally deem mutually exclusive. They can be in several places at once, for example, and in the case of photons simultaneously exhibit two kinds of polarisation. We never see this superposition of different states in ordinary life because it somehow disappears once a system is observed: when you measure the location of an electron or the polarisation of a photon, all but one of the possible alternatives are eliminated and you will see just one. Nobody knows how that happens, but it does.

Here we will discuss about some amazing applications of quantum computers:

Cyber security is becoming a larger issue every day as threats around the world are increasing their capabilities and we become more vulnerable as we increase our dependence upon digital system. Various techniques to combat cyber security threats can be developed using some of the quantum machine learning approaches mentioned above to recognize the threats earlier and mitigate the damage that they may do.

Artificial intelligence needs to be able to pull from large datasets of image, video and text. Thankfully, there doesn’t seem to be a shortage of content. In fact, there may be an overabundance. Big data is out there to be analyzed, but we need more powerful computers to process the petabytes of unanalyzed data. Quantum computer could empower machine learning by enabling AI programs to search through these gigantic datasets concerning medical research, consumer behavior and financial markets and make sense of them.

With all the speedup quantum computers offer in the computing field, one thing gamers might be curious about is whether they can be used to make a sweet gaming rig which can run games at blazing high framerates.

At this point, the field of quantum computers is still at its infancy, and current hardware still hasn’t reached “quantum supremacy”-which is when quantum hardware can compute faster than the current best computers, though the definition is still vague. This is because quantum computer algorithms work very differently from classical ones. Even with that, quantum gaming still seems to be possible.

Although drug design is really a problem in computational chemistry, I put it into its own classification because it is used by the pharmaceutical industry. Many of the drugs being developed still do so through the trial and error method. This is very expensive and if more effective ways of simulating how a drug will react would save a ton of money and time.

Quantum cryptography mainly focuses on the key distribution part of a cryptosystem, here two pairs of entangled qubits are used. One is sent to the receiver, while the sender keeps the other. Entangled particles in a superposition, when measured, affect the other qubit. Send a stream of these qubits, and you have a key usable for encryption.

Imagine, say, you are a traveling salesman. You wish to visit a handful of cities and want to know what the most optimal routes would be. This would be an example of an optimization problem. It sounds simple enough, but, in reality, the process can get quite involved as you up the number of variables. With only 270 destinations, for example, there are more combinations of travel than atoms in the universe.