Manatees, Sirenians
Sirenians
Scientific name: Sirenia
Sirenians (Sirenia), also known as sea cows, are a group of mammals which includes dugongs and manatees. There are four species of sirenians alive today, three species of manatees and one species of dugong. A fifth species of sirenian, the Stellar’s sea cow, became vanished in the 18th century due to over-hunting by humans. The Stellar’s sea cow was the largest member of the sirenians and was once abundant throughout the North Pacific.
Sirenians are huge, slow-moving, aquatic mammals that live in shallow marine and freshwater habitats in tropical and subtropical regions. Their preferred habitats include swamps, estuaries, marine wetlands and coastal waters. Sirenians are well-adapted for an aquatic lifestyle, with an elongated, torpedo-shaped body, two paddle-like front flippers and a broad, flat tail.
Key Characteristics
The key characteristics of sirenians include:
• Large aquatic herbivores.
• Streamlined body, no dorsal fin
• Two front flippers and no hind legs
• Flat, paddle-shaped tail
• Continuous tooth growth and replacement of molars END_OF_DOCUMENT_TOKEN_TO_BE_REPLACED 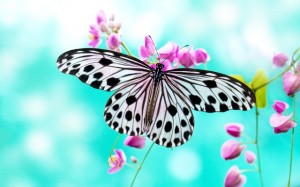 Butterflies are insects.
A butterfly’s lifecycle is made up of four parts, egg, larva (caterpillars), pupa (chrysalis) and adult.
Butterflies attach their eggs to leaves with a special glue.
Most caterpillars are plant eaters (herbivores).
Fully grown caterpillars attach themselves to a suitable twig or leaf before shedding their outside layer of skin to reveal a hard skin underneath known as a chrysalis.
An adult butterfly will eventually emerge from the chrysalis where it will wait a few hours for its wings to fill with blood and dry, before flying for the first time.
Butterflies can live in the adult stage from anywhere between a week and a year, depending on the species.
Butterflies have four wings. END_OF_DOCUMENT_TOKEN_TO_BE_REPLACED