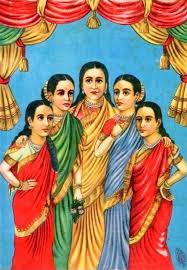 Panchakanya (पञ्चकन्या, pañcakanyā, lit. “five girls”) is a group of five iconic heroines of Hindu epics, extolled in a hymn and whose names are believed to dispel sin when recited. They are Ahalya, Draupadi, Sita or Kunti, Tara, and Mandodari. While Draupadi and Kunti are from Mahabharata, Ahalya, Tara, Mandodari and Sita are from the epic Ramayana.

#1 Gandhari, The Mother Of A Hundred Sons

#3 Mandodari, The Queen of Lanka

#4 Kannagi, The Bane Of Madurai

The Upanishads are late Vedic Sanskrit texts of religious teaching and ideas still revered in Hinduism.
Who wrote the Upanishads?
Veda Vyasa
What is know is that the Veda (of which the upanishads is a part), were compiled into four volumes by Veda Vyasa sometime after the Mahabharata war in the 5th millennium BCE as, with so many deaths, there was danger that this ancient wisdom would be lost in time.

In the Devi Mahatmyam
The story of Sumbha and Nisumbha begins in the fifth chapter of the Devi Mahatmyam. Parvati relates how two brothers of Asura stock sought to conquer the Three Worlds by subjecting themselves to severe penance and purification rituals so that no man or demon could destroy them.[1] Sumbha and Nisumbha traveled to Pushkara, a sacred place, and remained there in prayer for ten thousand years. God Brahma saw the brothers’ penance, and was pleased, granting them the boon they requested.[2]

It was at this time that Chanda and Munda, two lesser Asuras in the service of Shumbha, encountered Parvati, and were overwhelmed by her beauty. They carried reports of this goddess to Shumbha, who sought to possess Parvati and her beauty. Shumbha sent the demon Sugriva to court Parvati, but she rejected his advances. It was then decided by the demonic brothers that if Parvati would not come willingly, they would have to abduct her. The demon Dhumralochana and his retinue of sixty-thousand Asuras were sent to abduct Parvati, but she took the form of Mahakali and managed to slay the entire army. Next, Chanda and Munda were deployed, then Parvati destroyed them.[2] Parvati got the epithet Chamunda from destroying Chanda and Munda.

Death
After these encounters, Sumbha and Nisumbha had no choice but to meet Parvati in direct combat. Although Brahma’s boon had granted the brothers protection against men and demons, no such protection existed against goddesses. Nisumbha was the first to fall, after assaulting Parvati’s lion.[3] After Nisumbha’s death, a powerful demon emerged from his corpse, but Parvati managed to dispatch this monster as well, by decapitating it. Upon seeing the death of his brother, Shumbha went after Parvati in a rage, but was ultimately cleaved in two by the Goddess’ trident. With Sumbha and Nisumbha gone, the Three Worlds returned to their ordinary state of being, rid of a great evil.

By: Vineeta Tawney
CNESystems
Leave a reply
Lord Ganesh is a symbol of perfection.
His small eyes, characteristic of an elephant head, indicate that he is far-sighted, just the way we squint when we want to see something far away or clearly. It means, as in the general sense of far-sightedness, that he considers the consequences of his thoughts and actions, and is not narrow-viewed ( instead of saying narrow-minded )
Lord Ganapati has large ears, and a small mouth. Again characteristic of elephants. This means that he listens much more than he speaks. Which is the ideal we all need to aspire to. And which is the trait of ideal communication.
(There was something excellent sister Shivani said about his trunk, which I dont remember now. I should’ve written it down ! )
His large body, means he has great acceptance/tolerance level. Things that come/happen to Him, he is able to absorb it, and keep it down. Acceptance and tolerance is what we all should aspire to.
On the topic of His having an elephant head. Lord Ganesh was made from the “mal” dirt of the Devi. Mal-Buddhi. If an artist wanted to depict that Vinayak’s intelligence had been upgraded, how could he do that ? An elephant has the reputation of being wise. An elephant head depicts that Lord Ganesh is prefectly wise.
Shri Ganesh has a mouse as his vehicle. A mouse is viewed as an animal constantly in action, nibbling and chewing and gnawing away at things that we had rather it did not. Creating waste. In excess of its requirement. In ceaseless nervous energy. Multiplying at a fast rate. Much the way as our mind and its thoughts. Lord Ganesha is astride this mouse, in control and directing it to auspiciousness.
On the topic of Lord Shiva chopping of Vinayak’s head. The story is that Lord Shiva returned from meditation and was angered at Vinayak obstructing his way, and chopped off his head. How could anyone returning from years of meditation have such a fit of temper ? All the story wants to say is that Shiva baba upgraded Vinayak’s current status of Mal-buddhi to one of perfect wisdom.
After years of meditation Lord Shiva gave us an upgraded Vinayak, a perfect being with perfect wisdom, and perfect Shiva soul qualities.
Shri Ganesh is shown with two companions – Riddhi and Siddhi. Prosperity and Virtues. When one is so perfect, these companions are bound to follow.
Ganapati Bappa Morya !
Thanks to Brahmakumari Sister Shivani for her beautiful, peaceful, non-violent meditation on Ganapati Bappa.